The importance of a good first touch from a back pass. 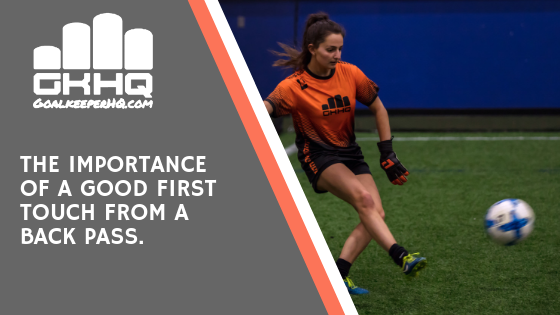 The importance of a good first touch from a back pass.

The ability to have a good first touch when a back pass is provided breeds confidence to both the goalkeeper and the team. The perception of the goalkeeper is very important and talked about here [Ways to improve your perception as a goalkeeper].

Like a poor first save, a poor first touch and resulting consequences can give the opposition a boost in morale as they see that the goalkeeper they are playing against is susceptible to mistakes.

This was recently the case for one of my old students, Lee Butcher, whose poor first touch resulted in a scramble to collect the ball in the first 10 minutes….. needless to say, the opposition chased down every back pass thereafter, making the game difficult for Lee.  See the video here.

You will see from the video that in all honesty, the touch was not too bad. He got in line with the ball, his touch went forward….. but it was slightly too heavy considering the player charging in.

Good control from a backpass is vital throughout the game. I was watching my team play last week in which the substitute goalkeeper for the other team, who was keen to impress, got himself in trouble with this very topic. It was the eighty ninth minute of a tense promotion chasing game. See below how his bad first touch leads to some juggling antics.

One of the biggest mistakes from a first touch perspective is Rene Huigita’s mistake in the 1990 World Cup. See here for the video.

More recently, Houston Dynamo goalkeeper, Tyler Deric suffered from a poor first touch that resulted in the winning goal for new MLS team Orlando. It’s a shame for Tyler, as up until then, he had had a great game.

Sean Johnson’s recent mistake against Minnesota is an example of what could happen if you don’t take a first touch at all.

Here are some common mistakes.

Some drills to use: