Don’t abuse the leniency of “The 6 second rule” 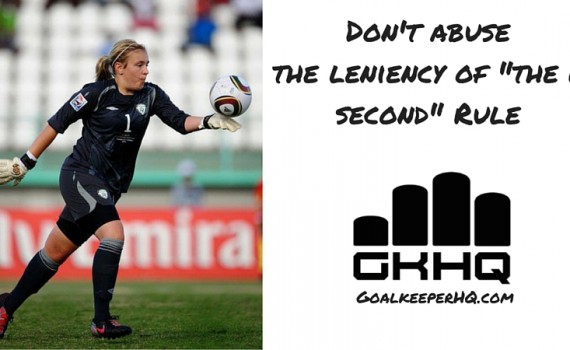 Don’t abuse the leniency of “The 6 second rule”

So after what was meant to be a quick comment on the November incident in which Liverpool Goalkeeper, Simon Mignolet got penalized for holding on to the ball too long in what is known as “The six second rule” – I have found myself full of information about changes to the rules in the goalkeeper’s possession. Having played through many of these changes which took place in the late 80’s and early 90’s I thought it interesting to list them here.

The six second rule came as an amendment to FIFA’s Law 12 back in 1998, which states that “a goalkeeper is not permitted to keep control of the ball in his hands for more than six seconds.”

This rule was to stop the goalkeeper, who has the privilege of handling and holding the ball to delay the game and waste time for the advantage of his or her own team.

See what got Simon Mignolet punished. ( below )

Almost all associations agree that the rule was not meant to be strictly reinforced, and as long as the referee deems that the goalkeeper is making a sincere effort to release the ball, there is no need to strictly enforce the 6 second rule.

Some notes for goalkeepers.

As you can see from the above video, it’s only when you abuse the rule ( Mignolet takes some 22 seconds ) that you get penalized. As the goalkeeper, you will be the one to blame as there are so many distribution options….. even if you drop the ball on the floor and distribute with feet.

The result in this game and also in the 2012 Olympics USA v Canada which Erin Mcleod finally gets penalized after her 3rd lengthy delay, is in indirect free kick and a goal against.

How can we combat this?

1 ) Speak with your coach about the game tactics. Long or short distribution?

3) Increase your range of good distribution

4) Be comfortable with the ball at your feet so you can drop the ball and play if necessary.

If a keeper is being impeded bo the opposition,how does this affect the 6 second rule?